A challenge posed by the increase of closed systems is the transfer of semi-finished products without losing the aseptic conditions required by regulations. A new study has tested a transfer system aiming to offer biocontainment without losing cell viability of ATMP products 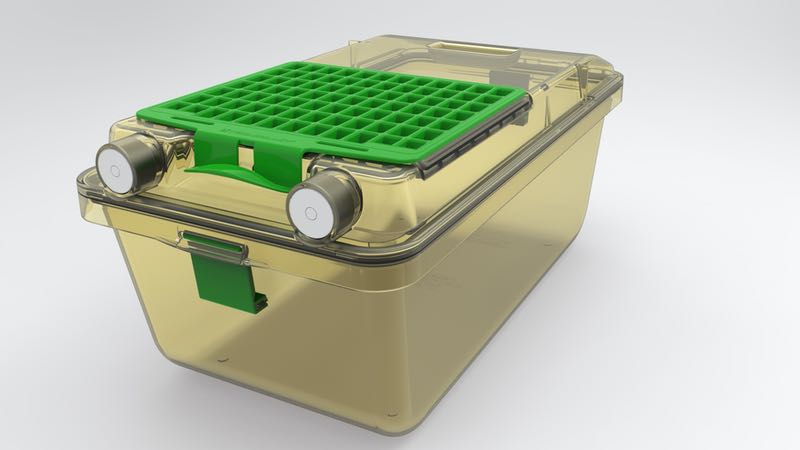 Recent technological progress is giving a strong push to the progress of Advanced Therapy Medicinal Products (ATMPs), making them accessible at lower costs for patients with different pathological conditions. One direction this is taking is the use of closed systems, such as isolators, for production in GMP environments that require the development of strategies that simplify their use. The use of these types of systems is strongly suggested for the production of ATMPs as established by the regulatory framework proposed by the Committee for Advanced Therapies (CAT).

The use of closed systems such as isolators instead of the classic open cleanroom solution for the production of ATMPs is, in fact, becoming a preferred alternative due to the considerable advantages obtained, both for product and operator protection and for the strongly reduced running costs incurred with closed systems compared to those relevant to open ones. Moreover, with isolators, working conditions are far less fatiguing in comparison to the open solutions (see scheme of bio-confinement concept).

Closed systems require reduced space for their installation; at the same time though, this implies that less space is available when equipment needs to be embedded into the isolator-controlled work area. This aspect has required the development of new tools that should allow the biological products, such as cells or other specimens growing in flasks, to be moved outside the isolator while maintaining the same aseptic conditions as in the Grade A work area of the isolator.

The challenge of these closed systems is the transfer of semi-finished products, such as flasks and other containers, without losing the aseptic conditions when goods are moved from a Grade A isolator to another Grade A isolator located in the same Grade D cleanroom, as required by regulations. 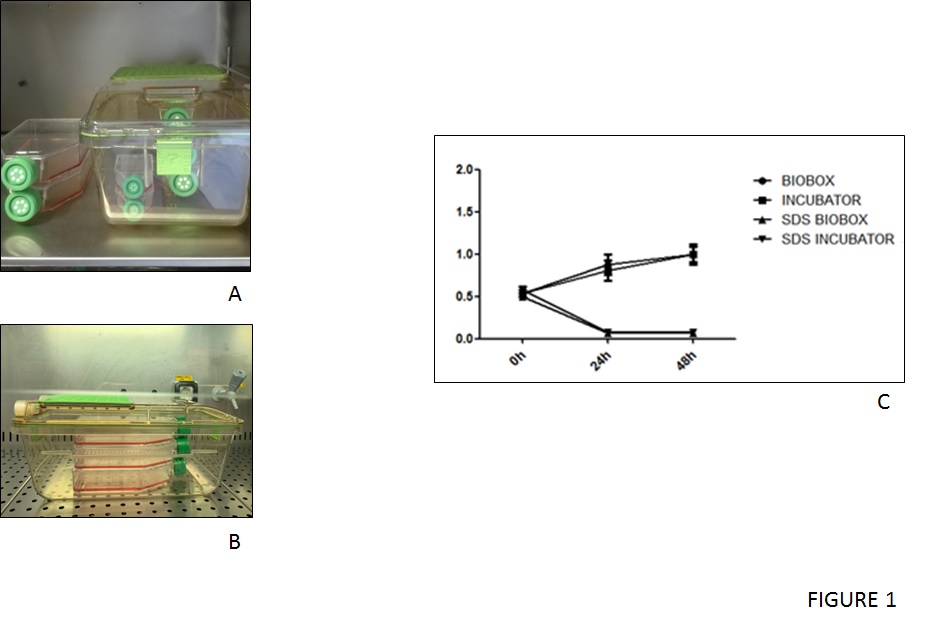 Transfer systems that are maintained inside the same aseptic conditions as in the Grade A area of the isolator, during material transfers, without breaking the continuity of the isolation, are the well-known Rapid Transfer Port (RTP) ports and containers, or the sterile connectors used for the transfer of liquids in and out of closed systems.

A new study has looked into a new tool that allows the transfer of cultured cells in a sterile and bioconfined environment; IsocellBIOBOX. The new design is a closed system made in a special moulded plastic material PSU or PPSU that is resistant to thermal and/or chemicals sterilisation cycles (H2O2), equipped with a HEPA filter membrane that allows gas exchange (CO2 and O2) but avoids the possibility of external particulate contamination entering the airtight container. PSU and PPSU are part of a family of high-performance thermoplastics, known for their toughness and stability at high temperature. It is, therefore, possible to autoclave the plastic parts more than 500 times at 121°C - 134°C. The HEPA filter membrane within the box is a microbiological filter (H14 as per UNI EN1822-1:2019).

The use of IsocellBIOBOX allows the cells contained in flasks that have been prepared in the Grade A work area of the isolator to be removed and incubated inside standard external CO2 incubators, but in separate IsocellBIOBOXs. This keeps cells from different patients safe from cross-contamination and drastically reduces the equipment costs compared to other solutions that use specially designed CO2 incubators.

IsocellBIOBOX is a bioconfinment tool based on a special patented enclosure. The box is made of two parts; a cover and a container, and the patented locking system provide an airtight closure between the two parts. This locking system is based on a special U-shaped silicone gasket positioned between the cover and the container; this gasket secures a perfectly airtight seal between the two parts of the box itself and therefore guarantees the biocontainment of the system. 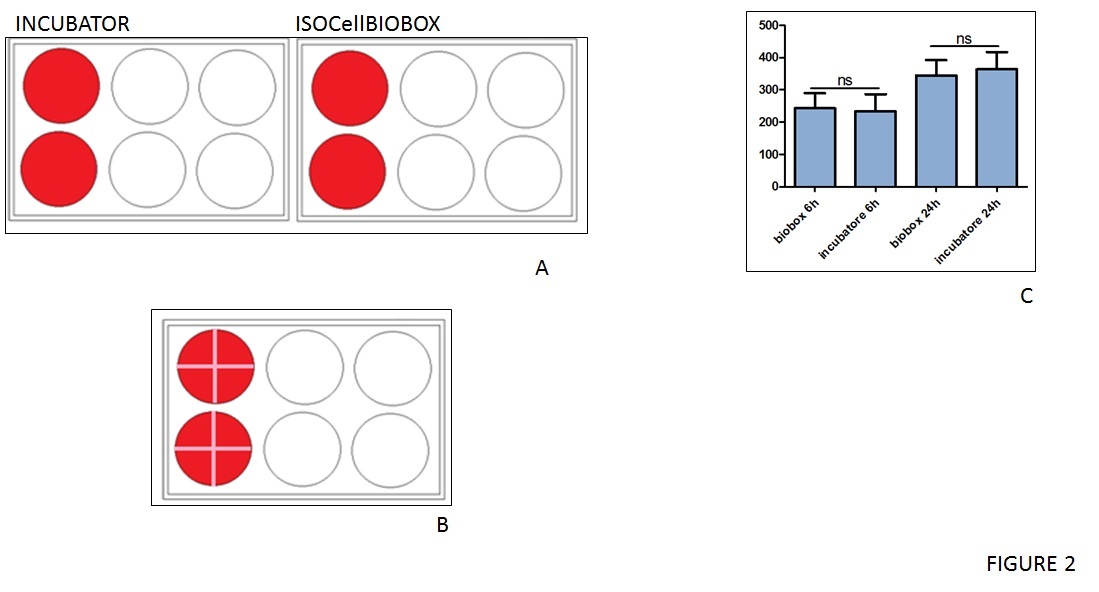 Thanks to these features and strictly maintained airtightness, once the box has been closed it will, according to GMP regulations, secure the same internal aseptic conditions as in the Grade A work area of the isolator, even when it is removed from the isolator. This means it will protect the cells it contains from any contamination during transfers through lower classification environments (i.e. Grade C or D cleanrooms).

Using the IsoCell BioBox will, therefore, allow the use of external standard equipment (such as standard CO2 Incubators) installed in environments where the Grade A Isolator has been placed.

Cell viability studies, the evaluation of cellular stress, as well as the measurement of some physical parameters such as CO2 concentration, were all performed to evaluate the functionality of the IsocellBIOBOX.

In order to confirm the possibility of growing the cells inside the IsocellBIOBOX without impairing their survival and proliferative potential, an MTT proliferation assay was performed.

Moreover, to confirm the eligibility of the isolator as a culturing tool, the proliferative potential of MSC-BM cells had to be evaluated inside and outside, and this showed both groups of cells displayed an increase in their number proportional with the time of culturing. Contrarily cells that received SDS medium undergo a significant reduction in their number (figure 1C).

To further investigate that the use of IsocellBIOBOX didn't affect biological capabilities of cells, a wound-healing assay was performed using epithelial immortalised HACAT cells. After starvation, the cells were a uniform layer and a cross-shaped scratch was performed as showed in figure 2B. Pictures of each well were taken at 6 and 24 hours after the starvation and the results were quantified using ImageJ software (figure 2C). These cultures also showed no significant differences between inside and outside the isolator, adding merit to the box's functionality.

At the molecular level, to investigate stress and apoptosis markers of the MSC-BM cells cultured in incubator and inside the IsocellBIOBOX, a western blot was performed with HSP90, HSP70 and Caspase 8. The obtained results were normalised with Actin and quantified and as observed in figure 4, no significant difference in the level of Hsp70 was seen among the two conditions as well as HSP90 and Caspase 8. 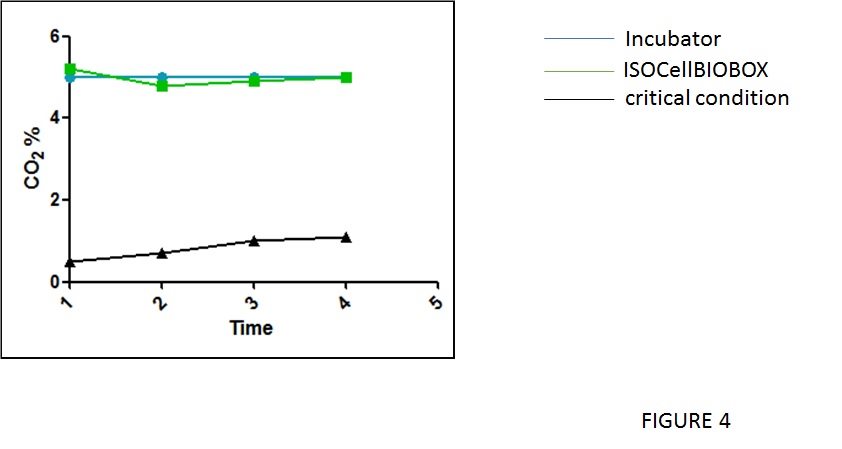 In these evaluations, the IsocellBIOBOX demonstrated that its use does not adversely affect the maintenance and viability of the cells within it. Furthermore, this work shows that the H14 filter membrane of IsocellBIOBOX does not influence gas exchange between cells and environment and avoids any possible contamination to penetrate inside the isolator when hermetically locked.

Transfer systems that are maintained inside the same aseptic conditions are the well-known Rapid Transfer Port (RTP) ports and containers, or the sterile connectors used for the transfer of liquids in and out of closed systems

To date, apart from some patented commercial solutions with a high economic impact, the IsocellBIOBOX represents a unique, reliable, GMP-compliant, low-cost, easy-to-use system that guarantees the bio-confinement of the samples in the same aseptic conditions as in the Grade A area of the isolator, during the transfers of semi- or finished products.

Data presented from this study also demonstrated that IsocellBIOBOX is a tool capable of protecting cells from outside contamination when moving them out of the isolator, without adversely affecting their survival when incubated in standard external CO2 incubator. 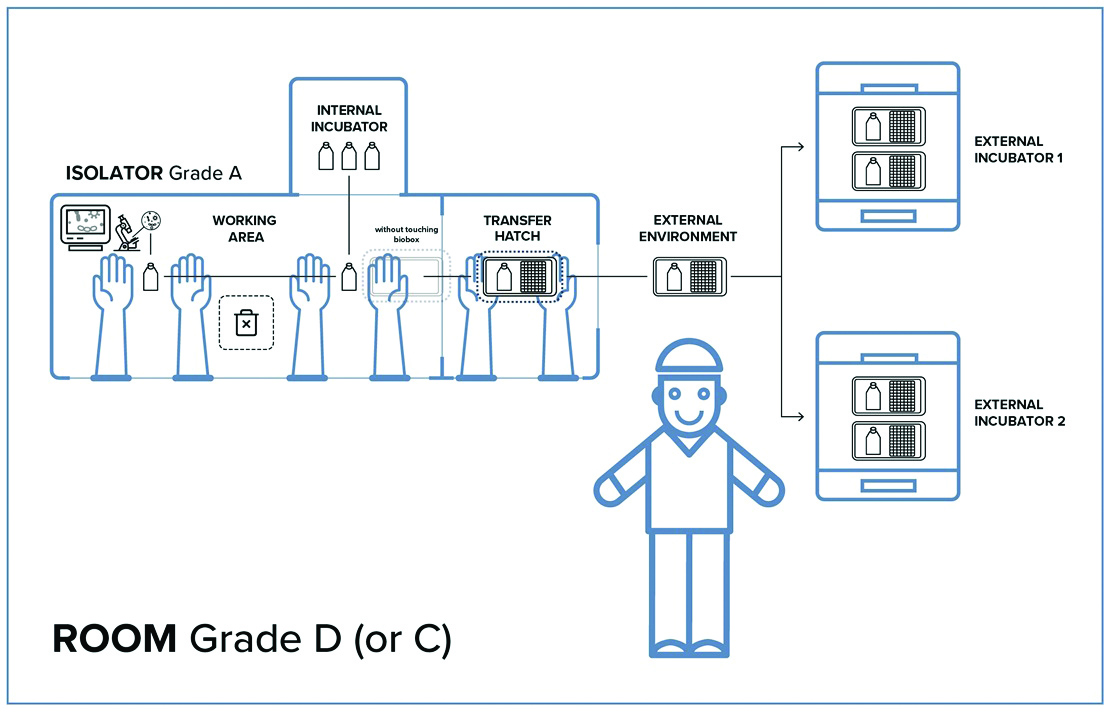 IsocellBIOBOX provides an impenetrable hermetic transfer tool to external contamination such as viruses and bacteria. Normally, operations inside the isolator have "short duration cycles" lasting a few hours, while operations in the incubator for ATMPs, have "long duration cycles" which can last several weeks. This makes the incubator embedded in the isolator a limiting factor especially when cells from different patients must be handled. IsocellBIOBOX eliminates this problem by making the two cycles compatible and providing a 100% safe transfer system for the transfer of cells to external CO2 incubators. The use of IsocellBIOBOX and the incubator embedded in the isolator are synergistic, therefore they can be used simultaneously.

The transfer capabilities and synergistic workings of incubator and isolator is why the system has become an indispensable tool to be used when working in closed systems for ATMPs productions or other applications requiring a strictly controlled bio-confinement.

This article is adapted from the paper, 'The Concept of Biological confinement (Bio-confinement) in Closed Systems for Advanced Therapy Medicinal Products production' by Cristina Zaniniet al.