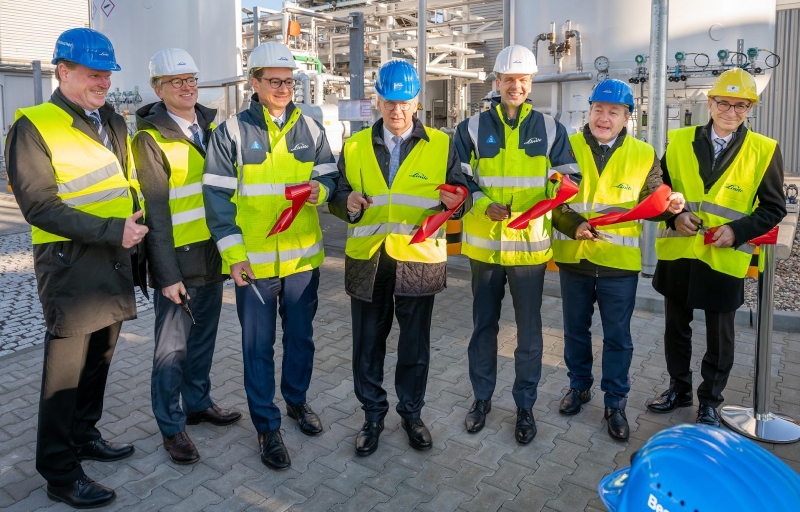 Linde has expanded its production capacity for krypton and xenon at its largest industrial gases production site in Leuna (Germany).

The new complex for the production and filling of these noble gases is the most advanced of its kind and one of the largest in the world. It was officially opened on 19 January in the presence of Saxony-Anhalt’s Minister President Dr Reiner Haseloff, Dr Mathias Kranz (Vice President Onsite & Bulk Germany at Linde GmbH) and Dr Christof Günther (Managing Director InfraLeuna GmbH). Accounting for an extremely small share of ambient air, the noble gases krypton (Kr) and xenon (Xe) have unique chemical and physical properties that are used in highly specialised applications.

In addition to their function as shielding gases for welding, the electronics and aerospace industries in particular rely on ultrahigh-purity noble gases. As chip manufacturing expands in Europe, demand is expected to increase. “With this investment, Linde is consolidating European noble gas production at the Leuna site,” said Dr Mathias Kranz at the official opening.

Wolfgang Dornow, Director of Noble Gases Linde, explained that the plant complex is a milestone in the supply chain for high-tech customers both inside and outside Europe: “With the construction of this plant, Linde is setting new standards worldwide for quality and security of supply which will benefit our customers.”

With this investment, Linde is consolidating European noble gas production at the Leuna site

Joachim Heider, Executive Director of the North/East Region Linde, also emphasised the company’s partnership-based cooperation with the authorities and with site operator InfraLeuna: “We received a lot of support for this forward-looking project, which is why we were able to implement it quickly.” The new plant started operation at the end of 2022.

Linde already produced a raw gas mixture enriched with krypton and xenon in Leuna, but the refinement of the gases was carried out at other sites. The new facilities include an additional separation plant which increases the capacity for this primary product, while at the same time enabling processing of the two noble gases in a high-purity form on site, by combining further separation and purification stages. The pure gases produced are now filled directly into various pressurised gas cylinder containers for transport.

Leuna was the preferred location for the new plant due to its excellent transportation links at the heart of Germany and Europe, as well as the extensive experience available for the operation of highly specialised facilities. In addition, Linde is able to exploit synergy effects with existing plants that the company operates at the same location. This means that not only are experienced personnel available for on-site operation and maintenance, but also Linde’s Remote Operation Centre (ROC), which is networked throughout Europe.