Speed of synthesis is of the essence when medicinal chemists invent new molecules, reports Sarah Houlton

The faster they can be screened, the quicker the lead optimisation process will be, and the sooner it can undergo testing for activity. But once a molecule moves into preclinical and then clinical development, much larger quantities are required, and the synthetic route used on the lab bench is rarely appropriate.

Process chemists then have to redesign the synthesis, avoiding expensive reagents and separations as far as possible, reducing the number of steps and using more atom-efficient reactions, and ensuring that the purity of the active pharmaceutical ingredient (API) will be acceptable to the regulators.

A significant reduction in process mass was achieved by chemists at Genentech in their re-engineering of the synthesis of GDC-0084, a selective dual PI3K/mTor inhibitor that is being investigated as a potential treatment for brain cancers.1

The drawbacks of the discovery route included multiple expensive chromatographic separations and the presence of trace heavy metal impurities, but they also identified that two steps could be eliminated by replacing separate addition and cyclisation steps with a direct annulation to form the structure’s fused morpholine moiety (Figure 1). 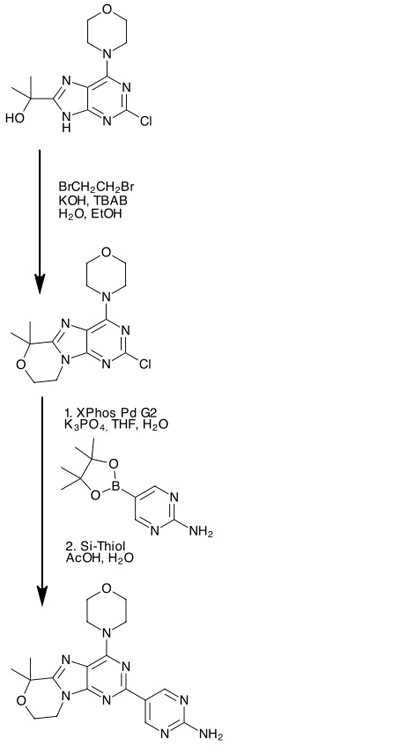 Although the first version of the new route produced nearly 4kg of the API, the annulation also generated a large quantity of side-product with a pendant morpholine. This, the desire to identify a more efficient catalyst for the subsequent cross-coupling, and the requirement to minimise the formation of a problematic acetamide impurity, led to further optimisation of the route.

They alighted on the use of a phase transfer catalyst in the annulation reaction. Adding tri-n-butylammonium bromide allowed the reaction to proceed in water without the need for organic solvents, and reducing the temperature gave fewer impurities. The product could be directly crystallised out of the reaction mixture.

For the Suzuki cross-coupling reaction, the biggest problem was the high catalyst loading at 2 mol%, allied to a very high solvent volume. A catalyst screen showed that Buchwald’s second generation XPhos PD G2 catalyst was more active than the PdCl2(dppf) that was used in the original synthesis; the lowest catalyst loading that still allowed the reaction to go to completion was 0.5%. The product precipitated out of the crude reaction mixture on the addition of water.

Finally, the palladium scavenging purification purification was optimised to prevent the formation of an acetamide impurity that was previously present at levels close to the maximum permitted. This was achieved by reducing the acetic acid: water ratio, and as the palladium loading had been reduced in the previous step, a much smaller amount of Si-thiol was required to reduce the residual quantity of palladium below the permitted 10ppm.

The improved route was used to make 6.4kg of the API, with numerous inefficient processes such as solvent exchanges and extractions having been eliminated, and the overall total solvent volume reduced by two thirds.

The process development for a melanin-concentrating hormone receptor 1 antagonist being investigated to treat obesity at AstraZeneca was done in collaboration with chemists at AMRI.2 The initial route, used to provide API for preclinical and Phase I investigations, had a number of problems, including a genotoxic intermediate being formed in a mesylation activation that they expected would be hard to remove without resorting to chromatography, which was solved by altering the order in which the fragments were connected.

Of particular interest was the synthesis of the 6-oxa-2-azaspiro[3.3]heptane fragment, which features in a number of potential drug molecules and can be considered to be a structural surrogate for morpholine. The traditional synthesis is very atom inefficient, starting from the commercially available flame retardant tribromopentaerythritol. It forms the spiro fragment with tosyl protection, which must then be deprotected, and the filtration process to purify it proved problematic.

They developed an alternative synthesis that gave a benzyl protected fragment instead, and although a high catalyst loading of Pd/C was required to remove the benzyl group, recrystallisation followed by a hot ethanol slurry to ensure the correct polymorph was sufficient, and this material was used for toxicological studies (Figure 2). 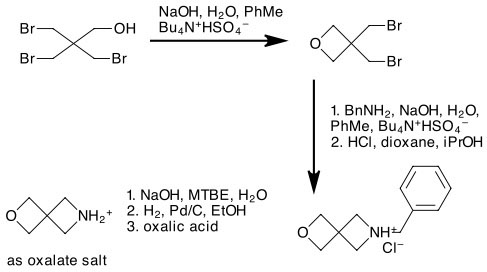 Further improvements were made for scale-up to the pilot plant. These included the replacement of sodium triacetoxyborohydrate with the propionate analogue in the reaction where the spiro fragment is coupled to the next fragment. The acetoxy compound is insoluble in organic solvents and must be added as a solid, which is hazardous at a large scale as hydrogen gas is formed, whereas the propionate can be added in solution.

Genotoxic side products were also an issue in the synthesis of the Genentech hedgehog pathway inhibitor vismodegib. Working with chemists from Siegfried, an optimised process was developed that minimised these impurities.3

The route used to manufacture vismodegib, marketed to treat basal cell carcinoma under the brand name Erivedge, has four steps. One of the custom-made starting materials has a nitro group, raising the potential for the production of mutagenic impurities, as it raised structural alerts for predicted mutagenicity.

The discovery route took this nitro starting material, and was reduced with iron filings in acetic acid to give the aniline, and then an HBTU/HOAt amide coupling with the second, acid, starting material. However, large amounts of waste were generated, and it was difficult to operate at scale, so an improved route was necessary.

The same nitro starting material was transformed to the amine via catalytic hydrogenation, and a range of catalysts were assessed before 1% platinum and 2% vanadium on carbon was determined to give the best results in terms of conversion. An HPLC-based method for reaction monitoring was devised to ensure any mutagenic byproducts were identified. Medium temperature and pressure – 60°C and 88psi – were determined to give the best balance between over- and under-reduction, in 9:1 methanol and acetic acid as solvent (Figure 3). 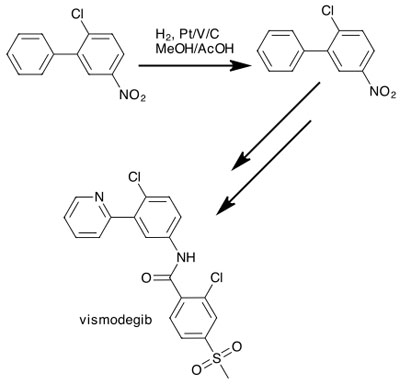 Fluorine substituents are commonplace in drug molecules, as fluorine’s small size and high electronegativity can have a big effect on an active’s properties, from its lipophilicity and binding affinity to its ADME and toxicity properties. They are frequently derived from readily available fluorinated building blocks, but some direct fluorinating agents are available, such as HF, Selectfluor or DAST. However, using a direct fluorination reaction at a late stage in a synthesis can cause problems ranging from low yields to intractable impurities.

An alternative has been applied by a team at Merck to the synthesis of the developmental osteoporosis treatment odanacatib — direct photocatalytic fluorination.4 Odanacatib incorporates a fluorinated leucine derivative, for which various synthesis have already been published, including five by Merck. These variously relied on chiral catalysis, biocatalysis, chiral resolution or the chiral pool for the stereochemistry, but all required classical epoxide or alkene hydrofluorination reactions to install the tertiary alkyl fluoride rather than a more direct fluorination procedure.

A reaction reported by chemists at Simon Fraser University in British Columbia looked promising, and the two teams collaborated on the synthesis. The key to the process is the photoexcitation of a decatungstate to an excited state intermediate that can abstract hydrogen atoms from aliphatic molecules to give carbon-centred free radicals. These radicals can then take part in fluorine atom transfer reactions with N-fluorobenzenesulfonamide (NFSI) to give organofluorine molecules. The low reactivity of the NFSI compared with other fluorine transfer agents mean side reactions are less likely.

The reaction, using methyl leucine as the starting material, proceeded well in acetonitrile and water. It was done in a flow photoreactor, and a 45 g batch of the desired S-[gamma]-fluoroleucine methyl ester was isolated via precipitation and filtration. Although it has yet to be done at process scale, the scaling out rather than scaling up that characterises continuous flow reactor process development means that it should be appropriate at a larger scale. (Figure 4).

Go with the flow

For some reactions, such as those requiring very low temperatures or reagents that are extremely toxic or explosive, a standard batch process can be less than optimal and a continuous process in a flow reactor can provide a better option. This was found by chemists at Eisai when they looked to improve the validated synthesis of the breast cancer drug eribulin.5

This includes three cryogenic reactions — a DIBAL-H reduction, an n-BuLi-mediated sulfone coupling and a desulfonylation using samarium(II) iodide. The problem was solved for the SmI2 reaction by replacing it with a chromium(II) salt, and they believed that higher temperatures would be possible for the DIBAL-H and BuLi steps if a flow reactor were used instead.

For the DIBAL-H reduction, in batch, the reaction is done at –80 °C to maximise selectivity. Initial studies in a flow reactor showed that the amount of DIBAL-H had to be doubled to ensure adequate conversion. Comparable conversion was achieved at –50°C, and by increasing the flow rate, maximum conversion with good selectivity was found at –40°C. Their next step was to make the route more practical by increasing the concentration so that a throughput of more than 1kg a day could be achieved, which had the additional benefit of reducing the amount of DIBAL-H that was required.

The issue with the n-BuLi mediated reaction was that the conversion rate was too low, and full conversion was not achieved under batch conditions. Shifting to a flow reactor meant the reaction proceeded well at –10°C, compared with the –70°C that was required to get the coupling to occur in batch mode. Better conversion was achieved, too; the highest conversion was found at 10°C, but there were concerns about degradation of the product at this temperature.

Another flow process — this time to avoid having to use large quantities of potentially explosive diazo compounds — has been developed by scientists at Pierre Fabre, in conjunction with chemists at Cardiff University.6 They were working on the 1S,2R enantiomer of the serotonin–norepinephrine reuptake inhibitor milnacipran, levomilnacipran, and easy access to a fused bicyclic lactone intermediate would make it quick to make functionalised analogues. However, the synthesis involves a catalytic cyclopropanation, for which the starting material is made using a diazo transfer reaction, and which is not ideal on a process scale because of its thermal properties.

Both the diazo transfer reaction and the cyclisation were performed in flow conditions. The transfer was done safely in DBU, with the temperature monitored using infrared inline analysis to ensure it was not reaching dangerous levels (the reaction is exothermic, and the product had been determined to have a decomposition onset temperature of 77°C). The reaction time was short, at 14 minutes, and high yields were achieved at 65°C; a longer residence time improved the yield, but not an increase in temperature.

The diazo derivative could then be used as the starting material for the crucial intramolecular cyclopropanation reaction, again in a flow reactor. Rhodium octanoate was found to be the most efficient catalyst for the diazo decomposition, with toluene the optimal solvent (Figure 5) The best results were seen with a substituted diazo allyl ester a 91% yield of the bicyclic substrate with a residence time of only 10 minutes.

A semi-batch set-up was also investigated, with the diazoester being formed in a continuous flow manner, and then, after an inline liquid–liquid extraction, run into a flask containing the rhodium catalyst. The lactone was produced in much lower yields than in the flow version. Slightly improved yields were achieved when the solvents used were dried using molecular sieves and stored under argon; previously, cost-saving technical grade solvents had been employed. Even then, the yields were lower than in the fully flow process, which was attributed to more water passing through the system.

Some — if not most — processes will always perform well in batch reactors as they are fast, safe, cheap and well understood. But, like these last examples, there are some processes in which the practical appeal may prove to be instrumental in the uptake of flow reactions in scale-up chemistry, and we will likely see more flow processes used in the manufacture of marketed drugs in coming years.