With six labs and three conference rooms totalling 840 sqm, the centre in China is mainly targeted at solids manufacturers in China and throughout Asia 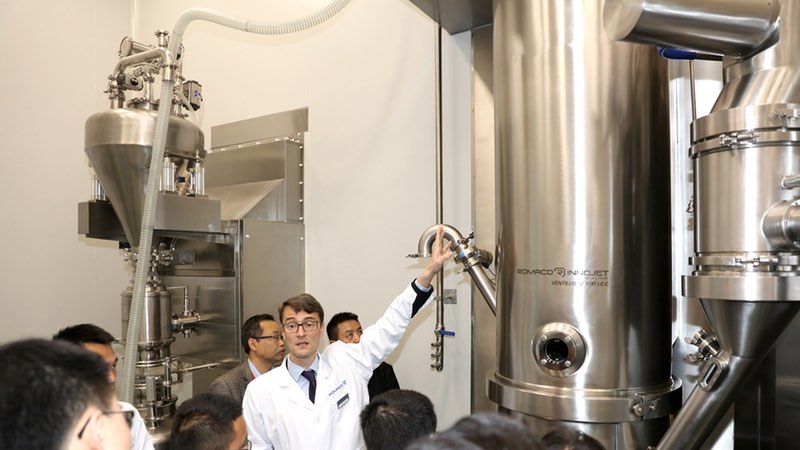 The “Romaco China Solids Process Centre” was officially opened by Romaco China and Truking on the Truking campus in Changsha on April 16, 2019.

After the opening event, visitors were subsequently provided with an introduction to Romaco’s processing technology and laboratory work in the framework of a seminar.

Dr h.c. Herbert Hüttlin, Founder of Romaco Innojet, spoke about the air flow bed method he developed several years ago, which was a breakthrough innovation in fluidised bed technology. Dr Carola Hanl, KiTech Laboratory Manager at Romaco Kilian, discussed the varied potential of laboratory work, not only for research but also for testing new processes and systems. The theoretical explanations then made way for the first practical demonstrations on the new premises, given by Romaco experts from Steinen and Cologne.

With six laboratories and three conference rooms totalling 840 sqm, the new processing laboratory is mainly targeted at solids manufacturers in China and throughout Asia. Depending on their needs, they can book laboratory sessions for drying, granulating, tabletting or coating solid particles.

The centre is Romaco’s first laboratory outside Europe. It is also the manufacturer’s first research institute dedicated to both processing and tabletting. Laboratory work is traditionally high on the agenda at Romaco. Each of the four European production sites in Steinen, Cologne, Karlsruhe and Bologna has its own test lab.

“Our daily laboratory activities are what drive our innovation process. Our customers’ needs, wishes and problems motivate us to perform at our very best,” emphasised Romaco CEO Jörg Pieper. “The physical and cultural proximity to our customers plays an important role here, and it fills us with pride that Romaco’s first non-European laboratory has now opened in Asia. The laboratory’s location on the Truking company campus is strategically placed for us.”

The road to now

Two years ago in 2017, after trucking successfully acquired Romaco, Truking set up a showroom for Romaco packaging technologies on its premises in Changsha. The opening of the “Romaco China Solids Process Centre” is further confirmation of Truking’s willingness to invest in strengthening the presence of its European subsidiary in the Chinese and Asian markets.

“The ‘Romaco China Solids Process Centre’ is yet another landmark in Truking’s collaboration with Romaco,” commented Yue Tang, Truking Group Chairman and founder. “The last two years have proved just what can be achieved when you have your sights set on a common goal. Romaco’s excellent visibility on the Truking campus in Changsha will enhance our global position and send out a clear signal to our customers.”

Encouraged by the successful launch of the “Romaco China Solids Process Centre”, Romaco is now planning to open more laboratories offering cross-technology services at its international Sales and Service Centres.