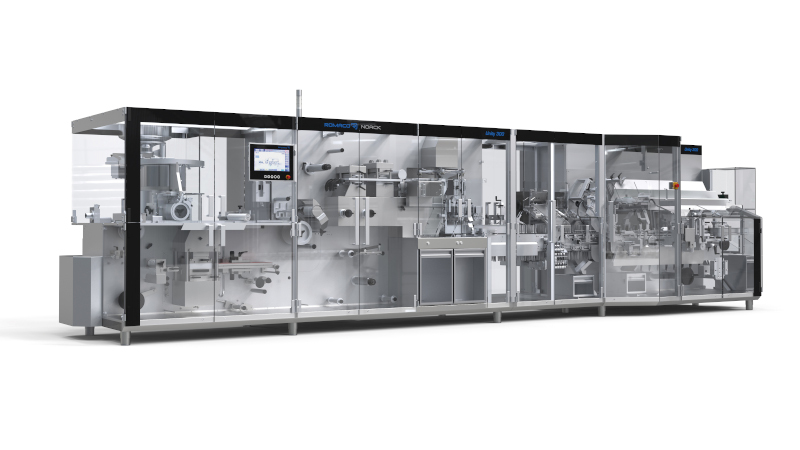 Romaco Noack will attend this year’s Taropak, showing its latest climate-neutral blister packaging line for use in the pharmaceutical industry. The Unity 300 is designed for the low to medium speed segment and was developed according to the principle “avoidance is better than reduction is better than compensation,” the company says.

The single-track blister line has been equipped with a monitor that keeps a continuous watch on the machine’s power and air consumption. Standby functions are also included to allow a reduction in the line’s base load during downtimes without any negative effects on overall equipment effectiveness, the company says.

The line measures less than eight metres long and has a correspondingly low carbon footprint. This is particularly true of the cleanroom for the primary packaging unit, the company says, where carbon dioxide emissions can be reduced in a targeted way by minimising the space needed. The blister line’s compact design is facilitated by a swing-out IPC magazine, which enables access to the punch behind it.

Additionally, the forming foil reel can be optionally repositioned inside the machine. The monobloc achieves a maximum output of 300 blisters and, depending on the cartoner, either 200 or 300 cartons per minute. The line is suitable for various applications, a key requirement in the contract packaging sector.

The integrated blister transfer from the rotary sealing machine to the continuous motion cartoner is done by an indexing wheel which removes the punched blisters vertically and feeds them directly to the cartoner. The suction cups of the carousel-shaped shuttle are only ever active while blisters are being transferred.

Furthermore, the machine housing is made from 100% recycled Plexiglass, while a carbon-neutral version of the line is additionally available on request. All in all, 68 tons of carbon equivalents are emitted during the production of the line, which can be offset by purchasing a Gold Standard climate certificate, the company says. It also guarantees to take back the machine free of charge at the end of its life in the interests of a circular economy.