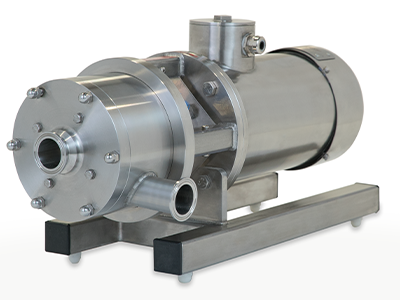 With more than 70 years’ experience supplying pharmaceutical companies from global leaders to small specialised companies, Silverson has extensive knowledge and experience of the particular requirements of pharmaceutical applications and the regulatory bodies.

In a recent pharmaceutical application Silverson’s 275UHS In-Line mixer was unmatched by other rival machines in its ability to finely disperse a hormone based active ingredient (AI).

A pharmaceutical manufacturer contacted Silverson as they wanted to develop a production process for an intravenous oncological medicine. The medicine would consist of a low viscosity liquid into which a hormone based AI needed to be dispersed. The nature of the hormone was the challenge in this application as it had to be dispersed finely enough so that the suspension remained stable and didn’t separate over time, but it could not be over-sheared otherwise the associated medical effects could not be guaranteed, leaving a small margin for mixing and dispersing the AI effectively.

The company requested that both laboratory trials and production scale mixing were to be done in an In-Line set up and informed Silverson that they would be carrying out trials with a number of other high shear mixing equipment manufacturers to find the mixer that would work best for their application.

For the laboratory trials a Silverson Verso, a laboratory scale In-Line mixer, was used to investigate how well it could disperse the AI. The mixer was supplied with a General Purpose Disintegrating head and a Slotted Disintegrating head allowing the company to test and compare results achieved using one mixer with interchangeable work heads, rather several different machines.

After intensive testing with the Verso the feedback from the company was that the Verso was the only piece of equipment among the homogenisers they tested that was able to produce the dispersion they were looking for. It was also the only mixer they would be able to easily scale up from laboratory to production scale.

In this application it was apparent that the margin where the AI remained undamaged but at the same time dispersed finely enough into the carried liquid was so small that none of other high shear mixing equipment from competitors could match the results achieved by the Silverson mixer.

To scale up to production scale the company purchased a Silverson 275UHS In-Line mixer from Silverson’s Ultra Hygienic range of mixers. The mixer was able to match the results achieved during the laboratory trial with no problems. An additional 275UHS In-Line mixer was purchased shortly after by the customer to continue expanding their production.