Working on a nano assembly line 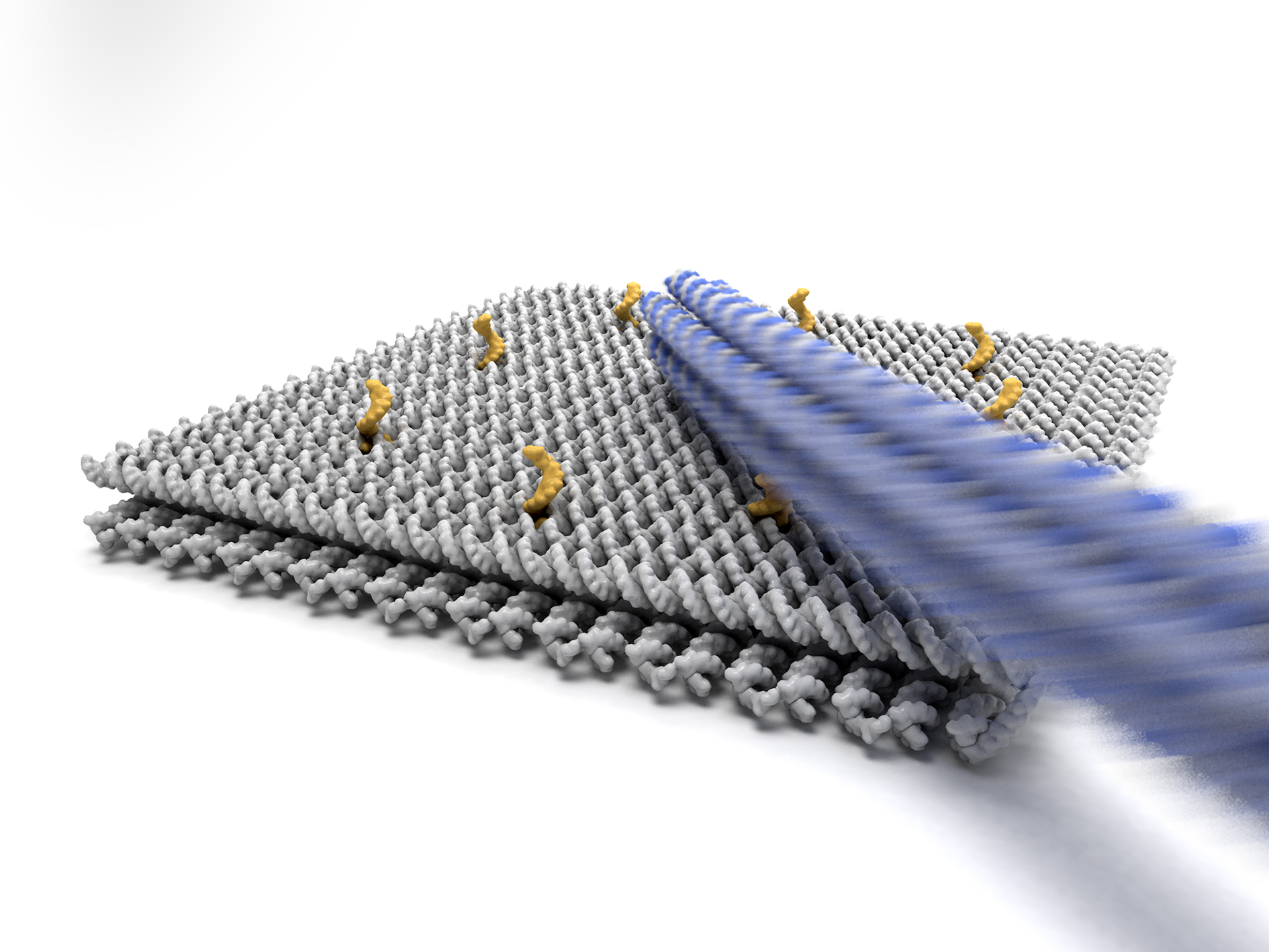 The novel electric propulsion allows molecular machines to move a hundred thousand times faster than with the biochemical processes used to date. This makes nanobots fast enough to do assembly line work in molecular factories. The new research results appeared in the renowned scientific journal Science.

The points of light alternate back and forth in lockstep. They are produced by glowing molecules affixed to the ends of tiny robot arms. A simple mouse click is all it takes for the points of light to move in another direction.

“By applying electric fields, we can arbitrarily rotate the arms in a plane,” said Professor Friedrich Simmel, Chair of Physics of Synthetic Biological Systems at TU Munich. His team has for the first time managed to control nanobots electrically and has at the same time set a record: the new technique is 100,000 times faster than all previous methods.

Scientists around the world are working on new technologies for the nanofactories of the future. They hope these will one day be used to analyse biochemical samples or produce active medical agents. The required miniature machines can already be produced cost-effectively using the DNA-origami technique.

One reason these molecular machines have not been deployed on a large scale to date, is that they are too slow. The building blocks are activated with enzymes, strands of DNA or light to then perform specific tasks, for example to gather and transport molecules.

However, traditional nanobots take minutes to carry out these actions, sometimes even hours. Therefore, efficient molecular assembly lines cannot, for all practical intents and purposes, be implemented using these methodologies.

“Building up a nanotechnological assembly line calls for a different kind of propulsion technology. We came up with the idea of dropping biochemical nanomachine switching completely in favour of the interactions between DNA structures and electric fields,” said Simmel.

The principle behind the propulsion technology is simple — DNA molecules have negative charges, the biomolecules can therefore be moved by applying electric fields. Theoretically, this should allow nanobots made of DNA to be steered using electrical fields.

Robotic movement under the microscope

To determine whether and how fast the robot arms would line up with an electric field, the researchers affixed several million nanobot arms to a glass substrate and placed this into a sample holder with electrical contacts designed specifically for the purpose.

Each of the miniature machines produced by the lead author Enzo Kopperger is made of of a 400 nm arm attached to a rigid 55 x 55 nm base plate with a flexible joint made of unpaired bases. This construction ensures that the arms can rotate arbitrarily in the horizontal plane.

In collaboration with fluorescence specialists headed by Professor Don C. Lamb of the Ludwig Maximillians University Munich, the researchers marked the tips of the robot arms using dye molecules. They observed their motion using a fluorescence microscope.

They then changed the direction of the electric field. This allowed the researchers to arbitrarily alter the orientation of the arms and control the locomotion process.

“The experiment demonstrated that molecular machines can be moved, and thus also driven electrically,” said Simmel.

“Thanks to the electronic control process, we can now initiate movements on a millisecond time scale and are thus 100,000 times faster than with previously used biochemical approaches.”

On the road to a nanofactory

The new control technology is suited not only for moving around dye molecules and nanoparticles. The arms of the miniature robots can also apply force to molecules. These interactions can be utilised for diagnostics and in pharmaceutical development.

“Nanobots are small and economical. Millions of them could work in parallel to look for specific substances in samples or to synthesise complex molecules – not unlike an assembly line,” said Simmel.